This film should be called Battlesh#t, worst excuse for a movie ever! I heard that it was made semi in the image of ye ol' game of Battleship. Ie. You've sunk my Battleship (Can I get an award for saying Battleship a billion times in one post?) 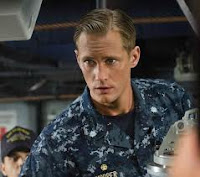 There was a huge hoo-ha made about this film, I don't know why... maybe it's because it's Rihanna's (yes the singer...) first attempt at acting and boy was she terrible! Every time she came on screen I morphed into Chris Brown (another singer who tried to be an actor) and wanted to slap her silly. What is she doing? She falls so flat every time she says anything. I might just avoid every film she's in after this. Stick to singing RiRi!


I did get a little excited when I realised Alexander Skarsgard (True Blood) was in it! But then his Battleship got sunk and he was gone before the movie was halfway through! Pooey! God knows what they did for the other half of the film but it bored me silly!

And Taylor Kitsch.... I loved him in John Carter... this, not so much. Boring!

If you really want to watch it, just watch the last 10 minutes or so, that's the best bit...