I watched this film a while ago when it first came out, then I read all the books in a week. There are three books by Suzanne Collins and I'm pretty certain that they've signed to have all three made into movies as well.

Jennifer Lawrence (X-Men: First Class) is Katniss Everdeen, and I have to tell you that she is one of my least favorite heroines ever. If Jennifer falls flat on the screen it's because that's the way Katniss is. She seems a bit dull to me at times and she can never make a decision. Her character frustrated me to no end and I swear it's just dumb luck that keeps her alive throughout the whole series. I noticed during the movie that you don't get a lot of her inner thoughts coming across, whereas the books gave you a lot more info about why she acts the way she does sometimes... still, the character herself annoys the crap outa me.

Josh Hutcherson (Cirque Du Freak: The Vampires Assistant) is lovable Peeta Mellark. You are meant to instantly like him. He kinda gave me the creeps in the books, but I really liked Josh's portrayal of him. Then there's Liam Hemsworth (The Last Song) who plays Gale. I can't really say a lot about him without giving away the other two books but I did hear from a friend how annoyed they were with the ending of this film as it didn't give away what happens with Gale and Katniss. Don't worry people, that is resolved in the next two instalments!

I liked the casting for all three of these main characters but the highlights for me were Lenny Kravitz (the singer) as Cinna, Woody Harrelson (Zombiland) as District 12's drunken mentor, Haymitch, and Donald Sutherland (MASH) as the evil President Snow. Those three were cast perfectly for me! Stanley Tucci (The Devil Wears Prada) also impressed me as the flamboyant Caesar; the Hunger Games presenter. Can't wait to see his outfits for the next movie.

The flamboyant, almost cross-dress style was not quite what I envisioned but they were described to be overly dramatic in their dress. It's still a bit shocking to see. I was also wondering how they were going to keep death scenes family friendly, I'm pretty sure it's a PG-13 rated film... They did a nice mix actually, the cornucopia scene when they first enter the arena was done very well, lots of scene flashing and blood on swords but no gory wounds. Well done! 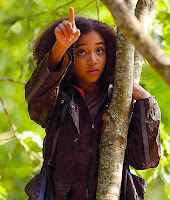 There was a lot of controversy over the casting of Rue (Amandla Stenberg) though I don't understand it myself. She was described as being dark of skin and to have a quality about her that reminded Katniss of Prim, not that she actually looked like her. Anyway, I have no beef with the casting or Rue's death scene. They were great.

Sorry about the ramble, you might get a few posts of this length when I've read the books to whatever I'm watching 'cos I like to compare the two. The only bit I was annoyed that they missed was the dehydration at the very beginning... missing that part made Katniss seem indestructible whereas in the books she came very close to dying. The next two instalments will be interesting to see, that's for sure!

[Score is mostly 'cos of the books and 'cos I know what happens]
Posted by Unknown at 16:47