I'm not a major fan of Brad Pitt (Fight Club, Se7en), at least not recently anyway. It's not that I don't like him, I just don't see what the big deal is about... I'm not a fan of baseball either, it's not a big sport here in Australia. I don't think I've even ever watched a game, but I do understand it.

Still, I thought I'd give this one a go and by now you must have figured out that I will watch pretty much anything!

Everything I needed to know about this film is in the preview and I probably don't need to go through the torture of the long monologues and bartering conversations swapping baseball players I didn't know. But, it seems to be True Story Sunday and I thought I'd stick with the theme. 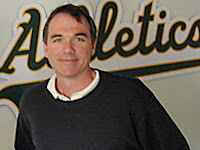 Billy Beane, coach of a failing baseball team wants more money to get better players to get more money, I get that. There's lots of arguing, lots of talking and I got a bit bored. Then in comes Jonah Hill? Was I the only one a bit confused to see the Jonah who usually stars in comedy dramas like Superbad and 21 Jump Street? Then I realized he plays a nerd. Riiight.

This is a feel-good true story, I probably wouldnt watch it again though... too long and too much talking for my liking.

Movie Quote:"Talking, la la la la" - Pitt.
Secret: I wrote this review before I finished watching the movie.... hahaha
Posted by Unknown at 02:43