Be still my beating heart; Christian Slater (Interview With The Vampire)! *fans self* He's looking mighty fine for an old man! I'm glad to see him in a few films lately and the fact that he kicks some major ass in this one is a freaking funtastic thing!

The whole idea of this film confused me. When I watched the preview above, I thought it was going to be rich people hunting down military people on some island, don't ask me how it was supposed to work.... then when they explained it in the actual film, it made even less sense. A guerilla group gets money off rich people for the tourist-like attraction of real war games, then uses that money to buy guns to supply to the guerilla faction and to pay an elite few mitilary peoples to escort the rich people through the guerillas territory... see, confused much? 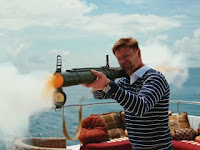 Of course, things go wrong. Twenty-three special operations and not a single soldier dead under his - Slater's - command... at least, until the very beginning of this mission! Boom! There goes the whole team before they even land on the island.

How are they watching fireworks at the end and not flinching from the bangs? After going through live fire like that, that's what happens to people! Eh, I'm sick of watching American power military movies, someone give me something different please! I do want a pair of those gaming glasses though!

[Quote]
"Wait a second let me get this straight, so you and Ernesto are pimping out your revolution as some kind of tourist attraction to a bunch of millionaires and you expect me to be your guide?" - Slater
Posted by Unknown at 20:03