This 15 track album, despite having an Intro track - which I'm never really a fan of, it's like cheating by adding another track to the album count - the beginning of this album had me hook, line and sinker. Rainman's style reminds me ever so slightly of early Urthboy and I was just a little surprised to see this album was distributed through Obese Records and not Elefant Traks. Then I heard Rainman will be on the decks for the Melbourne, Byron and Brisbane leg of Urthboy's Niave Bravado tour. Nice choice Urthy!

Can't See You has me rocking in my chair and singing the hook aloud. It's such a good song to start the album with; the beat is rocking and the hook is catchy. The last line of the song has been stuck in my head all week, I knew it was from another hip hop song but it just wouldn't come to me. Then the husband came to the rescue; The Herd - We Can't Hear You. That made me giggle, ironic. 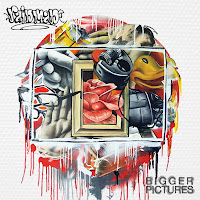 Muse Sick; it took me a little while to realize the play on words here. Yes, I know, sometimes I'm a bit slow. Love the smooth guitar riff in this track and I'm a sucker for a wicked womp womp bass line like the one that runs through the middle of this song. Not only that, but it has a killer addictive hook. Man knows how to arrange a song!

I found myself singing along to half the tracks after only hearing the album once. That's a good sign in my book! Features such as Seven, 4th (Vegas Aces), Muph, Tommy Illfigga and Calski rock my socks! Then there's some new names I haven't heard of before; Laneous, Kel On Earth (Bankrupt Billionaires), Yuin Huzami, Leah Carr, Pear and Youka. Ten points for anyone who can give me any info on these artists!

As per usual, this album has been on repeat all week....and it's still rocking! Buy it here!

"Push em both out like you're blowing a kiss, now flatten em out and make it look ridiculous." - Duck Face

@geeoh108 ps re more info: pear is from pear & the awkward orchestra, Youka is from Killbot Kindergarten, Yuin is from Coalition Crew...
— Rainman (@rainmantic) August 8, 2012