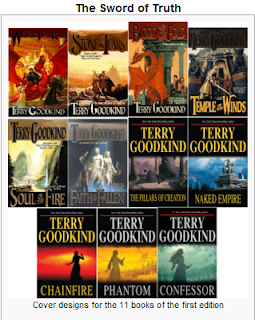 Okay, so I haven't read the entire series...really close though! It took me about the same amount of time it takes to gestate a child to read the first eleven books of this series and as I went to write this review I started doing a little research, as I do, and found out there is actually another book to this series; The Omen Machine. I'm both happy and sad about that; happy that there is more Richard and Kahlan, and sad that after all that reading there is still another book! It's kind of win / win though isn't it? 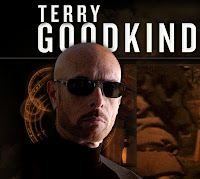 Before you say it; yes, I'm aware there is a TV series (Legend of the Seeker) based on these books and without saying too much about it I will tell you that I watched the show first and then started reading the books. I'm glad I did because even though the first season follows the first book pretty closely, the second season does not. I plan on watching the show again now that I've finished the books just to see how much I like it the second time round. Stay tuned for a post on the show.

The first few books are great. I always love the beginning of a major series, the character and world set up is great. Looking back on the beginning now, I have to say that those first three or four books are my favourites. Towards the middle and end of the series Goodkind starts to talk.... a lot... and although it is stuff that you need to know about the itty bitty details of magic and how it all works, it repeats itself a lot. I found myself skim reading a lot of the magic explanations and previous books recap paragraphs... there was a lot of them.

Side Note: If you are going to skim read paragraphs of explanations, make sure you still read the stuff Richard is thinking / saying - 'cos you know, he's the Seeker of Truth and he normally figures stuff out well before everyone else! 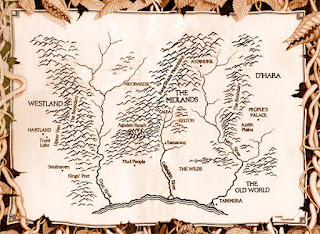 It does impress me when an author builds a whole new world, religion and different peoples, and Goodkind has definitely done that here. Maybe that's why there are so many wordy explanations.

It was nice to see previous important characters from the first few books such as Gratch and Gregory make another appearance right at the end to save the day. I did semi-expect another appearance of Darken Rahl but was okay with it when that didn't happen. Denna being a good spirit, the evolution of Nicci, defeat of Jangang and opening of the Boxes of Orden. Brilliant!

Not one of my absolute favourite series but definately an awesome addition to my bookshelf!

Buy them here. See what I'm reading now on Goodreads.

PS.
I've been a bit slack over the last few days because I just bought a Kindle and have spent the entire weekend reading books... I got through three in two days...
Posted by Unknown at 22:14