I went into the film feeling pretty so-so and I think that has affected this review. Kristen Stewart gives me the shits, she does this stupid thing with her mouth (that's what she said) that makes her look like a stunned mullet. I'm going to screen cap it so that you will never be able to think of anything else except how derpa she looks. 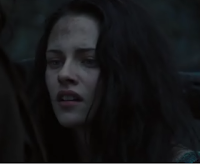 On top of the face, she is a terrible actress. Has anyone seen any of her other stuff....besides Twilight? Adventureland? Into The Wild? Both terrible movies and her character is the same in them all! For goodness sake, someone give her a character with substance so we can all finally realise how bad she actually is! Argh!  At least she can pull off the English accent, which pretty much anyone can do. How is she famous?

Thank God for Charlize Theron (The Italian Job)! She is so amazing, I'm in awe. It's not easy to say the "Mirror, Mirror" line without sounding bloody ridiculous.... Charlize manages it somehow. She is the saving grace of this film I think and I was more interested in her story than I ever was of Snow. Want more Evil Queen, Ravenna!

Even though Chris Hemsworth (Thor, The Avengers) is in this too but I found his character a little underwhelming and therefore have nothing to say about him... Raffey Cassidy (Dark Shadows) was just adorable as the young Snow White, maybe they should have let her do the whole film! Sam Claflin (Pirates: On Stranger Tides) is William, who I'm assuming is meant to be like a Prince Charming character? I don't know... I also just wanted to point out how nice it was to actually see Snow's mum (Liberty Ross), normally she's gone by the time we enter the story. 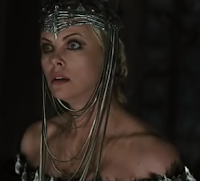 Even though I really didn't like this film overly much, the visual effects were pretty good in some places, such as the milk bath (as seen in preview). Brilliant, so well filmed. The hallucinations were also well done, a little foggy and stumbly as they should be, plus there were some of the weirdest looking fairies I've ever seen....

I found myself criticizing everything, like; the horse was just sitting there waiting for her? I guess they were trying to bring a little Cinderella into it, what with her bird companions, the horse, the white stag and the troll plus being locked in the tower and her filthy face - as in literally dirty, haha. Then she just leaves the horse to die? Bitch! That scene did remind me of The NeverEnding Story when Atreyu loses his horse, Artax *sobs*

They've left it really open ended for a sequel and I did hear rumours about Snow being the main character but after the scandal of Stewart and director, Rupert Sanders, they canned that idea and are now looking to do a sequel based around the character of The Huntsman; a much better idea in my opinion.

I almost prefer Mirror Mirror... at least that one blatantly makes fun of itself... I found the preview misleading, I thought Snow would be a warrior leading her people into battle but she's just as soft as she always is...