I am joining the masses in swooning over Jennifer Lawrence (Silver Linings Playbook, Winter's Bone) - she is amazing, though I'm more impressed with how she handles herself in the spotlight. She is a proper role model for young girls. This isn't her best film by a long way but I have to applaud her for making me more sympathetic to Katniss.

When I read these books (by Suzanne Collins) Katniss annoyed the absolute hell out of me. She is even more complacent than Bella (Twilight). She seems to achieve things but really it's more the people around her helping her. You don't get any of her internal monologue in the films - thank goodness - because she spends most of the time completely oblivious to the things going on around her. I felt like slapping her sometimes. JLaw seems to bring a bit more confidence to the character, which I like. 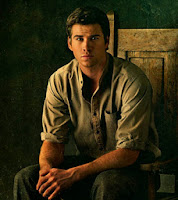 The two love interests - yes, I said two - are Peeta (Josh Hutcherson - Red Dawn, Bridge To Terabithia) the baker's boy who's always had a thing for Katniss and fellow Hunger Games winner, and Gale (Aussie Liam Hemsworth - Neighbours, Paranoia) Katniss' best friend and hunting partner. Unfortunately for Katniss and Gale, in order to win the Hunger Games Katniss and Peeta had to pretend to be madly in love. This is where the books annoyed me; it's damn obvious to us that Peeta actually has real feelings for Katniss but she is so absorbed in her own self and not being able to have Gale that she completely disregards Peeta. Ugh! There is a little of this in the film but it's not nearly as blatant as in the books.

This film was much better than the first and I'm sure the next one will be even better! That's the way it was with the books too, it's got a really nice build up and by the end the whole game has changed. I can't think of anything from the books that I missed in the film. The arena was just as I imagined it from the Lightning Tree to the Tsunami. Well done!

Next film we get to see The Mockingjay in action! Can't wait!